"What would our elections look like if we voted for the world we want to live in, rather than against something we feared?" 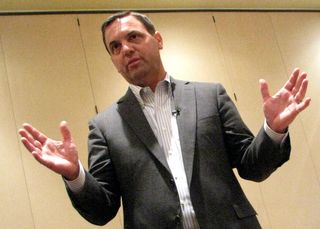 Neither Liberal minority Premier Kathleen Wynn or NDP Leader Andrea Horwath made the slightest attempt to work together to implement Proportional Representation.  Even though it would have benefiited both of their parties as well as them personally.

I assume Ms. Wynn is intelligent to occupy the position she does, and since she was on the ground for the LPO sabotage of Ontario's MMP referendum, she has a better chance than most to be able to comprehend how Proportional Representation works.  But for all her talk of consensus building, she got to where she is in a Winner-Take-All system, and I suspect has the hubris to believe she can be re-elected and win a majority. Kim Campbell probably felt the same once upon a time.

This is the man who would be King of Ontario

His policy has always has always been "my way or the highway" so he never factored in provincial governance when the Liberal majority slipped away.  If he ends up in the driver's seat, he won't be a public servant, he'll be a boss.

Funny thing is, there *is* an alternative, called the Green Party.  Both Federally and Provincially the Green Party has lost a lot of support over the last years, because people don't believe they can win.  Most of the people who haven't given up on our unfair system in disgust have been voting "strategically," which is to say voting for somebody you don't want because you're afraid someone you hate will be elected.

Clearly that doesn't work.  If we keep this up, we'll never get good government, things will just keep getting worse.

It's been a long time since the Green Party's only policy was the environment.  They have some interesting ideas at the provincial level....
http://theagenda.tvo.org/blog/agenda-blogs/steve-paikin-green-party-promise-could-shake-ontario-camp...
Call me crazy, but this seems a more credible financial savings strategy than Mr. Hudak's plan to increase home energy bills so corporations can get even bigger tax breaks.

I am quite pleased to note that I have a great green candidate ~ David Weber ~ running in the Kitchener-Conestoga riding.  I know David a little from attending some of the same Fair Vote events. David is certainly committed to meaningful electoral reform.
http://www.cambridgetimes.ca/news-story/4526644-police-officer-running-for-green-party-in-kitchener-...
http://www.gpo.ca/node/3192

If we get out and vote (and encourage people we think have given up to vote) and vote for what we want, we might actually get it.  If enough of us vote Green, we may well elect some Green representatives to the legislature.  Even so, they probably won't get a majority, but maybe we'll get a minority government.

It wouldn't be a human leader.
"man has dominated man to his harm" -Ecclesiastes 8:9

I'm afraid that very few candidates nor their leaders pass the, "Would you buy a car from this person?", test. I vote for the Green party on behalf of my grandchildren. There needs to be hope.

Thanks for your views.