Devuan is around the corner... 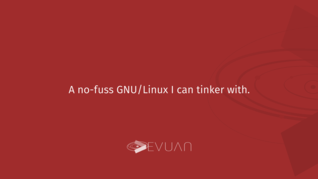 A few months ago a bunch of hysteric people slammed the door of Debian to fork it and follow up with a Jessie release that does not depend on systemd.

What's the fuss with systemd?  Well, apart it ignores your way of doing things, it also imposes its way of doing things, and this way has a strong tendency to permeate well beyond its primary task (init) into a feature creepy blob that eats the existing (and working, and well tested, and well known) GNU system.  Although alternatives to the old sysvinit abound, none is so invasive and opinionated as systemd.  And so, Devuan was born to give back space to these alternatives.

What do you think of this Debian fork?

“What do you think of this Debian fork?”

They probably don't really know how much work goes into making Debian.

Debian allows selecting the init system you wish to use, btw...