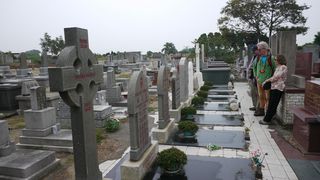 I asked Jeanette about her plan for the weekend when I met her at the conference banquet. The conference had brought friends and acquaintances to Tainan, my home city. When she mentioned Oliver were planning to take her and David to a cemetery Saturday morning, I immediately asked to join them. Oliver has been surveying and researching tombstones all over Taiwan. His findings are presented in meetings like this one in Tainan. Several times I sit in his talks. I knew I would not want to miss a field trip organized by him.

We met at 8:30 at Jeanette's hotel. By car, about 9 am we were already at the Nan Shan Cemetery. Oliver expertly walked us into a maze of old and not so old tombs in this massive public cemetery, pointing out things to look at and explaining them on the way. He took us to a tomb from the Dutch period, probably the oldest tomb in the island. From the inscription on the tombstone the person was buried in 1642 (崇禎十五年), a time this island was yet to be claimed by any Chinese emperor. The tombstone proclaimed however the buried person, a Chinese, a subject of the Ming emperor (皇明). The tomb is now a designated cultural site (Class 3). We explored a part of the cemetery mostly used in the Japanese period. The Japanese tomb styles there are totally new to me. The three-hour field trip ended at the Christian quarter. Oliver led us to the tomb of Thomas Barclay (1849 -- 1935, https://en.wikipedia.org/wiki/Thomas_Barclay_(missionary)) and those of other missionaries. Young missionaries from the England and Scotland would serve long years in this island called Formosa. Some would die soon after they arrived. Many of them would rest here in Tainan.