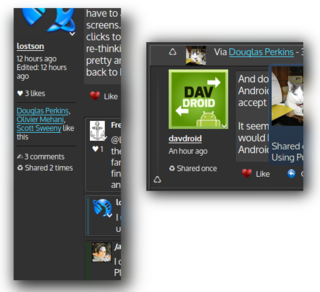 Some time ago I posted a note about how some breaking changes were coming to the development version of my Pump.io client, Dianara, which would break it in some ways, introducing a few regressions and making it... not fully usable for a while.

Well, at this point, I'd say the current -dev, v1.3.0-alpha+19 is fully usable again! As it's the development version, you can expect some rough edges, but I happily use it every day, and in many ways, it works much better than the stable 1.2.5 version =)

The main change has been the refactoring of the way the timelines are handled, which makes updates much faster now. Also, the annoying "timeline goes to top on update" effect is mostly gone. The number of unread posts is not reset on each update. If you get more new posts than what you have configured to show in one page, you'll be notified of how many more are pending to receive. The posts opened from the Meanwhile feed via the "+" button will now be able to load the comments much more often.

Other smaller enhancements are a few new options in the Configuration dialog, such as the options to highlight comments made by you, or comments made by the author of a post and to choose the size of avatars (left side of the picture), or more obvious "frames" for shared posts (right side, and also optional).

There's also an option to hide duplicated posts; that is, posts which were already visible in the timeline will not be shown again when someone shares them.

One new feature that is not visible is nickname completion, a.k.a. "mentioning". If you type '@' while composing a post, you'll get a list of the people you follow. You can then type the first characters of a name and use the arrows and enter keys to select the contact you wish to mention. When creating a note, this will add that contact to the "To" list, which means they'll get your post in their "direct messages" inbox. This was possible before, using the "To" and "Cc" menus, but now it's simpler =)

Check the current CHANGELOG for a more detailed list of changes.

If you didn't already use the development version of Dianara and wish to try it out, you can find it here: https://gitorious.org/dianara

P.S.- Note that one of the rough edges is that old posts are not discarded at the moment, so the timelines will get bigger and bigger, and memory usage will increase over time.