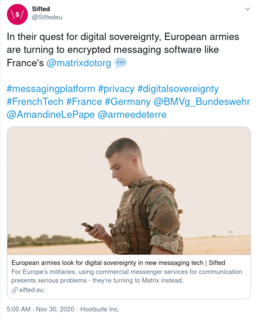 The sovereignty in discussion here looks just like the technology independence necessary for the states to go to war. So, would this be something like, “let’s go to war, genocide, devastation, and all kind of abominations, but with free software that’s ethic and respect the users' freedoms”?
A relevant debate to have.
Some definitions:

In this case is clear that there's no freedom through war development - war is by definition the negation of freedom to all the people involved, who suffer permanent atrocities, except just the very few beneficiaries who profit from it -, and community only can mean (specially talking about software and in an Internet era) the whole world, the all-humanity community. To respect freedom and community must mean to oppose war - which in turn must mean to oppose the social class and regime who impulse the war initiative.

Free software means the users have the freedom to run, copy, distribute, study, change and improve the software.
Free software is a matter of liberty, not price. To understand the concept, you should think of “free” as in “free speech”, not as in “free beer”.
→ https://www.gnu.org/

Liberty and free speech are two of the first things that get obliterated by war...

Free software (or libre software) is computer software distributed under terms that allow users to run the software for any purpose as well as to study, change, and distribute it and any adapted versions. Free software is a matter of liberty, not price: all users are legally free to do what they want with their copies of a free software (including profiting from them) regardless of how much is paid to obtain the program. Computer programs are deemed "free" if they give end-users (not just the developer) ultimate control over the software and, subsequently, over their devices.
→ https://en.wikipedia.org/wiki/Free_software

Clearly it's not the same to analyze this concepts in times of peace (where are those times?), but all this seems to call for a wider view and strategy.
Comments?
→ https://twitter.com/Siftedeu/status/1333319919178571783

Armies, as all capitalists companies and organizations, embrace free software mostly because it's free (in price). They don't care about communities at all. In fact, governements are trying to make encryption illegal for civilian users.

I don't want armies, so I don't care about their sovereignty, but some interesting questions arise: Should be free software used by anybody who don't respect freedom? Should free software licenses include some clause to deny that? If so, would it be really free?

My answers are no, maybe and no.

It seems more and more like an unavoidable issue. In my opinion 'freedom' has and will always have limits. Trivially, there's no sense in a concept of 'individual freedom' that goes against or doesn't take in account the general/social/community welfare. Concomitantly, humanity welfare requires the maximization of individual freedom, for numerous reasons, the most simple one, that humanity as a whole is compound of individual humans, so, there's no sense in a social welfare that depends on individual misery...
To avoid confusion: capitalism is the violation and destruction of all forms of social and general freedom, except for the freedom of a marginal social minority (capitalist class) to live and feed upon the exploitation and oppression of the immense social majority (working class).
So, only in a social regime where there's no exploitation neither oppression will social welfare and individual freedoms be a couple of the many aspects of the one and same thing.
Meanwhile, a free (as in freedom) software license that allows to weaponize such software seems not only as morally wrong, but also as logically absurd: weapons of invasion are by definition against people's freedom and communities welfare (we're not talking here about weapons for defense, like if we were under menace from some extraterrestrial force...). But, the use of free software by states and armies (both oppression apparatus) means also - maybe - more development of free software which could also be use by people around the world with all the benefits it has.
I'm under the impression that this issue has been discussed before, and that there is some license that prohibit military use of free software..., can't remember right now.
Clearly there's no sense in vindicate "free software and peoples' freedoms" when that means to kill and oppress people with weaponry (which today will be used by imperialist forces to invade and looting upon weaker nations)...
Don't know the answer, but seems to need further discussion, don't you think?