Memories of a march against DRM 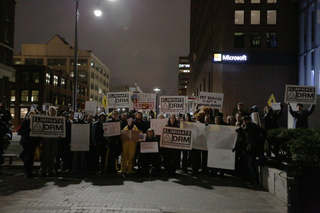 I wrote up a whole blogpost about the anti-DRM march I participated in post-LibrePlanet.

Grammar police moment: after you returned to MIT for the roundtable discussion, who was eaten and who took turns speaking?

Jason Self likes this.

thanks for the report.  I missed the outdoors event (too cold!), and ended up joining almost by accident another demonstration against DRM; an anonymous group set out to speak some words during the W3C reception that was taking place while you guys were outside, and we were gently but firmly kicked out, with such statements as "you're not welcome here, please leave", "the FSF was not supposed to be here, that was not the agreement", "this is private property, you have to leave now!", and then a campus guard escorted the people wearing anonymous masks out.  unsure about what to do, since I had not been formally addressed or kicked out, but not knowing anything about plans because I had got involved so late, I figured I wouldn't do much good remaining there by myself.  I planned to go out and find you guys, but there were some people already returning to pick up their backpacks, and others were already going on to the debate, so I went there.  so much for my first demonstration in the US :-(  (aside from my solo and silent demonstration held in Boston downtown on Friday, for democracy and rule of law in Brazil :-)

Okay, okay, I fixed the grammar thing. The post is now unambiguous about eating pizza but not humans.

j1mc, Jason Self likes this.