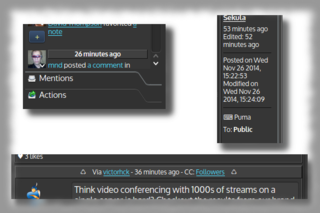 Hi! It's that time again!

Dianara v1.2.5-dev has all the features I wanted for this version in place, pending some further testing and some polishing, so it's now been tagged as "beta 1" and could use some wider testing from more people.

The main changes are, as illustrated in the image:

Take a look at the changelog for a more detailed list.

You can find the development version of Dianara on Gitorious.org: https://gitorious.org/dianara

This can be considered as a "string freeze" notice, too. Hopefully there won't be any changes in strings until v1.2.5 is released, so it should be safe for translators to do their awesome job =)

I'm targeting the week of the 15th of December for the final version but, as they say in Debian, when it's ready.

After v1.2.5 is out, I intend to make some breaking changes, so next version will start the 1.3 series.

Happy testing, and thanks for the help! o/

Update: Now it's beta2, with a few small fixes and almost-complete translations =)

Another update: Now beta3, with complete translations and nice fixes for memory leaks by Gregor Herrmann. Thanks!

Aqa-Ib, JanKusanagi @i, Colegota, Bd Sn and 1 others shared this.

Now tagged as Beta 3, with great fixes for old memory leaks. These fixes seem to work great. Thanks, Gregor Herrmann! ;)