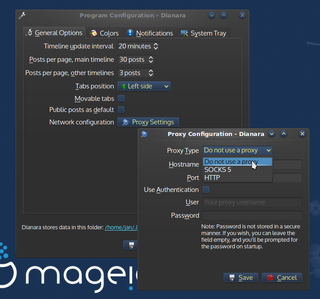 This was supposed to be another small release, but it took longer than expected. The main new feature is proxy support, but it also comes with a bunch of little fixes and improvements.

Other interesting changes include case insensitive filters, animated image support in the image viewer, a basic help window and a better initialization process, so Dianara will try to get your profile, contacts and timelines on startup several times, if it fails due to network or server errors.

Packagers should note that the manpage has been moved to section 1, as suggested in a bug report, which makes more sense.

P.S.- I should note that releasing at the same time as Impeller 0.9.5 was purely coincidental. You know, like they say at the end of most movies =)

Earlier today I was led to believe that there was a very weird bug in Dianara's post editor, but it turned out to be a problem with copy-pasting weird content from a very specific source. That led us to find a problem in Qt's rich text handling, but at least there's nothing wrong with Dianara xD

Thanks for this new dianara version!

Debian package has been uploaded to unstable: https://tracker.debian.org/news/561552

It will be available during next hours :-)

And we'll get this thrown in Trusty hopefully soon as it backported to my tests PPA from the Utopic Unicorn autolanding okay: https://bugs.launchpad.net/trusty-backports/+bug/1351992